Perhaps opening a project in which I play Civilization 5, a game which I – and many others – have a somewhat addictive relationship to. I began by playing one game, for the purposes of this blog, and have since started several others. In the game that I’ll write about below, I was randomly assigned the civilization “Ethiopia” (which is of course not a civilization), on a huge “Earth” map with 22 AI player-civilizations and 41 AI city-states. On the others, at least the ones I can remember, I’ve been Morocco, Mongolia, and Babylon. I have yet to finish any of these games, and so I still have no idea what’s in store for the game I’m blogging about, but some memorable scenarios have included Babylon being captured by Japan, the capital of Mongolia being Vancouver and the entire world (aside from myself, as Morocco, and England, of all civilizations, but including, for instance, America) following the ideology Order (aka Leninism, as far as I can tell). I suppose what I expect to be my final thesis will change rather drastically if the AI for Civilization 5: Brave New World consistently chooses Leninism as its ideology par excellence.

Civilizations: For Civilization 5, a civilization does not extend much past a “Great Leader,” or somebody from a civilization or nation’s history that has been identified as such. “America,” for instance, is probably not a civilization. Ethiopia, on the other hand, is more palatable, as something that either calls itself Ethiopia or is referred to as Ethiopia has been around since Homer. In any case, each civilization is led by a Great Leader, permanently, from antiquity through the nuclear age and beyond. In Ethiopia’s case, that is Haile Selassie, who presided over Ethiopia’s defense against European powers in the early 20th century; in America’s case, it is George Washington. You can imagine how amusing seeing that “Chairman Washington” is angry with me is…

Tourism: I’m not really sure I can put it much better than the game itself, which describes Tourism as “offense” and Culture as “defense.”

Ideologies: Also new in the Brave New World expansion is Ideology. As I mentioned earlier, in another game (playing as Morocco), I reached the point where Ideology becomes available, which is in the Industrial Age (do I need to explain Ages? I think they’re pretty self-explanatory) after your civilization has constructed three factories. The boiling-down of Western world history into this game is either appalling or incredible or both, right? In any case, if I remember correctly, there are three Ideologies: Freedom (corresponds roughly to what we think of as liberal democracy), Order (Leninism/Maoism), and Autarchy (Fascism).

That’s probably enough, for the purposes of this scenario.

As mentioned above, I decided to set up a game on a huge (the choices are small, medium, large, and huge) “Earth” map, a Civ 5 map that is a rough approximation of Earth. The scale is off, but still:

It’s difficult to tell in this image, but Ethiopia is located roughly where contemporary Albania is located; although, because of scale, that also covers most of the Balkans and Greece.

Game-wise, I asked for 22 AI player-civilizations and 41 city-states, which is the maximum number of both. For whatever reason, Civ 5 is most titillating to me when there is a maximum number of civilizations in the “world” at the same time. I also disabled a “Science” victory, whereby a civilization wins once they send a shuttle into space – worth a second thought, surely, but not here – and checked the boxes for “Random Personalities,” whereby the AI does not necessarily behave predictably based on the civilization, and “New Seed,” whereby the game’s mechanisms reset themselves whenever a saved game is loaded.

When I saved the game and exited – I think this was one or two sittings, probably about 8 hours of gameplay – it was 1450 AD and I was under attack by the Aztecs (go figure) and Germany. I view re-entering this game with a mix of curiosity and revulsion, as I will explain later.

First, though, a bit of a rundown. I think the thing that grabs or grips or otherwise ensnares me the most about Civilization is the opportunity to create differing world narratives. In this world, for instance, the civilizations I have encountered – that is, the civilizations in closest proximity to Ethiopia, which remember is located where Albania is in our world – are the Aztecs, Egypt (which, if I remember right, is where Ethiopia is in our world) – Brazil, Assyria, Arabia, Russia, Portugal, Byzantium and the Celts. Catholicism was the first religion founded, in 1160 BC. Eastern Orthodoxy, founded by me, was next – although I didn’t write down when. When you found a religion in Civilization 5, you are allowed certain “beliefs,” which constitute bonuses in the game. I added World Church, which spreads the religion faster and farther by a certain percentage, and Liturgical Drama, which grants a cultural bonus to religious buildings. After I founded Eastern Orthodoxy, Confucianism and Taoism were founded, both in 850 BC; Islam in 450 BC; Protestantism in 375 AD; Hinduism in 680 AD. This is all jumbled and a little backwards in terms of actual world history, especially the founding of Christian sects as separate religions and these religions being founded both before and after the turn between BC and AD, a distinction which hinges, of course, on the recognition of Christ as important. In fact, that the whole game is based on a timeline that is necessarily Christian is a bit alarming, but not particularly surprising.

Some wars: the Aztecs declared war on me in 900 BC. Our war lasted 200 years, more or less. Brazil declared war on Arabia in 650 BC, a war that lasted all the way to 350 AD, or about 900 years. The Aztecs declared war on Egypt in 125 AD; this war lasted a little over 500 years, until 640 AD. The Aztecs and Germany both declared war on me in 1450 AD – who knows how long that will go on. Each war tends to last at least 10 turns, which I believe covers about 30 or 50 years, maybe more. Certain civilizations and social policy trees grant money or culture for killing enemies. Military units cost money to maintain and gain experience/strengths based on how many battles they are in. A civilization that consistently engages in war will have a phenomenally better army than a civilization that doesn’t. Given that the Aztecs and Germany are both militaristic civilizations and that the Aztecs, at least, have been in more wars than I, I don’t have high hopes for our war. My civilization has a bonus against civilizations that are attacking me that have more cities than I do – a bonus gleaned from Ethiopia’s actual historical defense against European powers in the early 20th century – so if I’m not annihilated by the war it will certainly be long and tedious. I am being attacked, by the way, because of my rapid expansion.

When I play Civilization, I tend to follow a relatively predictable path: I choose the “Liberty” social policy tree and focus on building culture and science and, if it seems helpful, religion. Liberty is recommended for “civilizations that desire rapid expansion,” and the items in the Liberty tree allow for a faster production of workers and settlers, meaning that the civilization expands both materially and physically faster. Liberty allows the unlocking of the Pyramids, which provide two free workers. Liberty, in other words, creates a lot of slaves that perform a lot of labor, via the adoption of policies like “representation” or “citizenship.” 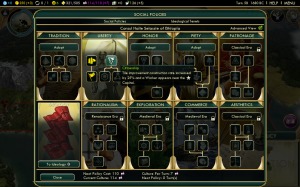 There’s a lot of things like this in Civilization 5, especially now with the advent of “Aesthetics” and Ideology. Military advisors (AI helpbots for duncy players like me) tend to advise that it would wise to construct or research cultural, aesthetic, or philosophical gains, especially since culture and tourism are weapons for the civilization. In fact, all aspects of life or society – religion, aesthetics, philosophy, the military – are yolked to the goal of the expansion and dominance of a particular civilization, which makes sense in terms of a game in which somebody has to win, and is totally alarming in the sense that this game might have anything to do with the way civilization actually does, should, or might operate. This might have something to do with the feeling I tend to have playing Civilization, which I described above as a mixture of curiosity – that ensnaring in a narrative that I mentioned – and revulsion. In fact, I might even be bored playing Civilization. I tend to listen to podcasts while I play, or audiobooks. The last time I had a major Civilization binge, oddly about a year ago (is it a seasonal thing?) I listened to Michel Foucault’s lectures at Berkeley, available on Ubuweb, over and over. This time, I finished listening to Moby Dick (which I began during my apartment search in July, which involved driving back and forth from Oakland to LA an absurd amount of times) and have listened to podcasts about the history of aesthetics and the history of philosophy, both of which oddly feature Canadian men sponsored by or lecturing at British universities.

I’m less enthusiastic about this project than I was previously, perhaps because I’m encountering a combination of my own addictive personality and the more revolting aspects of the game. Why do I enjoy falsely rewriting world history along the lines of Judeo-Christian neoliberal capitalism, with a view towards winning? I’m not sure I actually do.

3 scholars distracted by the fantasmic.